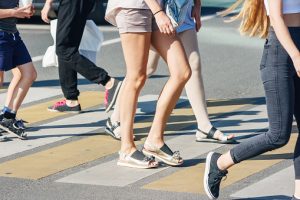 Throughout Del Mar, Hillside, Nye, Laredo and across Texas, pedestrian accidents can cause serious injury, especially to children and the elderly. Approximately 25 percent of all motor vehicle accident deaths involving children occur when the kids are pedestrians rather than when they are in a vehicle.  A personal injury lawyer knows that there are many reasons why children are especially vulnerable to pedestrian accidents, including the fact that they may be more difficult for drivers to see on the roads.

Recently, the Wall Street Journal published an article suggesting another possible reason why so many kids are killed in car accidents: inattention blindness.

How Does Inattention Blindness Increase the Risk of Car Accidents for Children?

Children under the age of 10 generally suffer from inattention blindness and they are not as capable of adults at spotting and responding to an unexpected object. A comprehensive study on this phenomena was conducted recently in Germany.

There were 480 school children included in the study.  The children were both boys and girls. They were between the ages of eight and 15. Each of the children was asked to watch a 30-second video of people playing basketball. Their task was to count the number of times that players wearing white jerseys passed during the video clip.

In the third video that the children watching, a man dressed up as a gorilla walked directly across the basketball court in the sight of the camera. The "gorilla" was in the video for approximately nine seconds in total.

After they had finished watching the video, the children were asked by the researchers whether they had seen anything in the video that was unusual. A total of 43 percent said that they had seen the gorilla. This means less than half of children observed this oddly dressed man over the course of the nine seconds.

The fact that so few kids saw the gorilla was attributed by the researchers to insufficient brain development. Kids 10-and-under are simply not as good as adults at responding to unexpected stimuli because they experience perceptual blindness. By the time a child has reached age 11, the differences between children and adults in this regard disappears and kids become better able to observe stimuli outside of their immediate area of focus.

Parents need to be aware that younger pedestrians may not see what is going on around them if they aren't focused on the road. Parents need to remind their children that when they are walking in or near traffic, they must alway keep 100 percent of focus on road safety at all times.

If you or a loved one was injured or killed in an accident, contact us today. The Law Office of John R. Solis has experience protecting the rights of accident victims in Del Mar, Hillside, Nye, Laredo and across Texas. Call 866-465-9093 for a free case consultation.