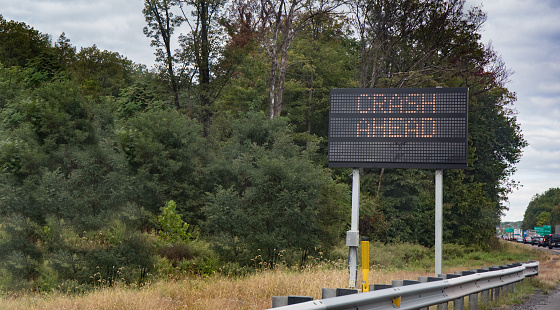 It seemed like a good idea. Encourage drivers to stay safe on the roads through messages about road fatalities on digital highway signs.

But a new study has found that these messages could be having the opposite effect.

Researchers examined several years of crash and road-sign data from Texas. They found that in the 6.2 miles after a message displaying fatality statistics, car accidents increased by an average of 4.5%.

The authors theorized that the signs put increased demands on the attention and information-processing ability of drivers, resulting in cognitive overload. This overload affected their ability to respond to changing traffic conditions and led to them making errors such as following vehicles too closely or drifting out of a lane.

A potential distraction on highways

They suggested that putting a stop to these messages could be a way to improve traffic safety at a very low cost.

“We did not start this project thinking these signs hurt, we thought they helped,” said Jonathan Hall, study co-author and an economics professor at the University of Toronto. “I think a reasonable takeaway would be that state departments of transportation should test their messages and track which of these messages are too distracting and which are helpful.”

In Texas, an official said the state Department of Transportation (TxDOT) was still evaluating the effectiveness of the messages, which it stopped displaying in March 2021.

The study noted that at least 28 states displayed versions of these messages at least once between August 2012 and May 2020, potentially affecting more than 100 million drivers. It looked at highway crashes in Texas between August 2012 and December 2017. During this time period, the TxDOT displayed fatality messages for one week every month on its existing network of 880 signs.

The authors estimated that these messages in Texas resulted in an additional 2,600 crashes and 16 deaths a year, at a cost of about $380 million each year.

If you’ve been injured, an experienced attorney can help

Regarding cognitive overload, study co-author Joshua Madsen, a University of Minnesota accounting professor, noted that while drivers like to think they can multitask, there is a limit to how many things they can focus on at any one time. Car radios, information consoles, and smartphones can also distract drivers, he said.

A distracted driver can easily cause a car accident that leaves people seriously injured. Victims may need extensive medical treatment and medical expenses can become overwhelming. But negligent drivers often deny being distracted, and insurance companies will try to limit financial compensation.

That’s why you need an experienced Laredo car accident lawyer on your side. Attorney John R. Solis fights for the rights of the injured. He investigates crashes to gather evidence that builds strong cases. He knows how to handle insurance companies and help clients recover the compensation they deserve for their injuries so they can move forward.

If you were injured in a Laredo crash, it’s important to get legal advice as soon as possible. Contact attorney John R. Solis today to schedule a free consultation. He can review the details of your accident, explain your options and answer any questions you have.