Tire Blowout Results in Fatal Semi-Truck Crash on I-10 Near Seguin, TX 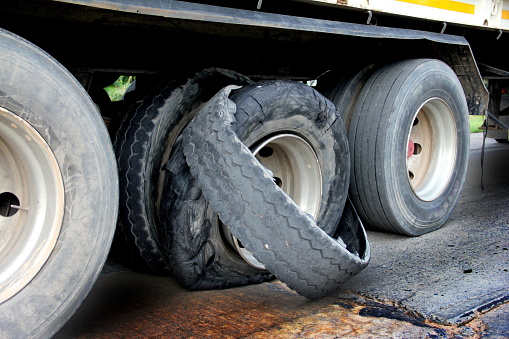 A truck accident lawyer in Laredo, TX reveals what you should know

Drive down any highway or major road in Texas and it’s likely you’ll see a large commercial truck. These big rigs travel at all hours on the way to pick up or deliver cargo. Most of the time, we barely notice them – until something goes wrong. Truck accidents are common in Texas and can happen at any time of day.

We don't need to look far for proof, as to our north on I-10 near Seguin, a passenger in a semi-truck recently died when the large truck went off a bridge, down a slope onto FM 725, and burst into flames. The driver of the semi, who lost control of the big rig due to a tire blowout, was transported to a hospital in San Antonio (as of this writing, his condition was unknown).

While no one else was injured in the accident, other road users often fall victim to truck accidents that can be attributed to a negligent trucking company, trucker, or some other party that may have contributed to the crash (e.g., the manufacturer of a defective part).

Fully loaded, a commercial vehicle such as a tractor-trailer, delivery truck, or tanker truck can weigh up to 80,000 pounds. The impact of a collision involving a commercial vehicle can have devastating consequences, leaving crash victims with serious and often life-changing injuries.

What happens when a semi-truck has a tire blowout?

Just like in the accident noted above, a tire blowout can result in the semi-truck driver losing control of the big rig and causing a horrible truck accident. Sometimes, debris from the damaged truck tire can cause other drivers to crash—but the biggest hazard to others remains the out-of-control big rig colliding with other motorists, people, and objects.

According to the National Highway Traffic Safety Administration (NHTSA), more than 11,000 accidents happen every year due to tire blowouts, resulting in over 200 deaths. Tire blowouts are a common reason for large commercial truck crashes, despite being preventable.

Too frequently, blowouts happen due to improperly inflated truck tires or driving with tires that are too worn, both of which can cause tread separation. Tread separation can cause the truck tire to quickly lose air pressure and explode, resulting in a dangerous tire blowout.

Other common causes of semi-truck tire blowouts include:

Lack of maintenance — If the air pressure on a truck tire is too high or too low, it can cause the tread to wear down and put the driver at risk of a blowout. That's why truckers typically conduct a detailed pre-trip inspection of the semi's tires.

Road debris — Semi-truck tires can be damaged by potholes and roadway debris such as glass and nails. A large impact from a pothole or puncture from something sharp in the road can damage the integrity of the truck tire and eventually cause it to fail. This is just another reason why truckers need to be attentive and avoid hazards that may result in damaged tires.

Too much cargo (e.g., overloaded trailer) — Again, a fully-loaded tractor-trailer can weigh as much as 80,000 pounds. That's a lot of weight for tires to support, and if a commercial vehicle's trailer is too heavy, it can put extreme stress on the 18-wheeler's brakes and tires.

Crash victims have recourse through the civil justice system

Lack of maintenance is a factor in a lot of truck accidents, but blowouts can also be the result of a defective tire manufacturer. The important thing to remember is that if you were injured or a loved one died in a crash with a large commercial truck in Texas, you have the right to seek compensation for all of your losses (accident-related expenses), including but not limited to your short- and long-term medical expenses, vehicle repairs, lost wages, and other economic damages.

With cases involving trucking companies, you may also be able to pursue exemplary damages, which are also referred to as punitive damages. Exemplary damages are intended to punish a person and/or entity for exceptionally egregious acts of negligence.

In short, truck accident cases are usually high stakes—and the other side knows this. That's why they often have teams of attorneys, experts, and specialists in their corner to protect their interests and reduce their liability.

John R. Solis, Attorney at Law can help you level the playing field. He knows the tactics that trucking companies and insurance adjusters use to downplay the severity of your accident. They may question how serious your injuries are or argue that they were pre-existing. They may blame someone else for causing the accident. Or they’ll offer you a settlement that falls far short of covering the losses you suffered.

Attorney Solis investigates to get the facts. He knows how to preserve evidence that's in possession of the trucking company, such as the truck driver's Hours of Service (HOS) logs and fleet maintenance records. He carefully reviews accident reports and interviews witnesses. Then he builds a strong case and fights for the compensation that you deserve.

Find out how our law firm can help you and contact us today for a free consultation with an experienced Laredo truck accident lawyer who fights for Texas crash victims.